INTERNATIONAL CONFERENCE
The Informal and the Formal in Times of Crisis:
Ethnographic Insights 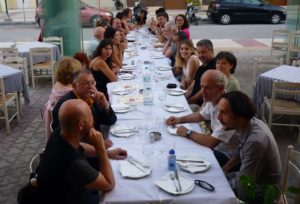 In today’s global scenario, urban settings are a dominant form of associated life that encapsulate the socio-economic impact of increasingly significant international regulations, and selective management of capital, knowledge and people. Over the last three decades, the crisis, and subsequent discredit, of polarised ideologies which had characterised international politics since the Second World War has apparently determined the supremacy of economics over politics, an acceleration of economic globalization and a progressive erosion of democracy. In many cases, however, politics in the form of authoritarian decision-making and superimposed adverse policies have jeopardised the democratic covenant and the attendant terrains of representation, responsibility and accountability in the exercise of the power to rule. This process has often brought about the loss of important parts of sovereignty, as wealthier nations and powerful supranational interest groups have been seen to bully weaker nations, often also resulting in ever-growing fiscal demands and withdrawal of credit throughout the social scale, which has often been paralleled by national and local governance riding roughshod over the broader society.

At the micro-level, this combination of events has engendered harsh living conditions for many ordinary people. Major casualties have been individuals’ access to basic rights and governments’ responsibility and accountability in the management of power. Mass migration from poorer countries to richer or relatively richer countries, or to countries that are perceived to be richer, has contributed to make this problem worse, often turning traditional cultures of tolerance into toleration and, sometimes, violent rejection of non-autochthonous people.

Anthropologists have addressed in-depth the significance of the informal in people’s managing existence.

In the above-outlined scenario, informal activities and modes of exchange — economic and non-economic — have often grown and they may have contributed to people survival; in other cases, long-established informal economic activities have disappeared alongside informal exchanges, while secure formal employment has become a chimera for many and zero-hour contracts, unpaid “internships” and similar, variously named cons, have multiplied. At the same time, new forms of informality are emerging — particularly but not only in the “on-line world” — that appear to be acquiring the status of resource as they raise new challenges to the bullies and “roughshod riders”.

This Conference will bring together high-quality ethnographic studies of these processes with the three-pronged aim of:

The Conference welcomes contributions and panels from anthropologists and scholars from other social sciences and humanities, and encourages participation of research students.

Abstracts (300 words maximum) should be emailed by the 27th of February 2017 to Dr Giuliana B. Prato (g.b.prato[at]kent.ac.uk), Dr Italo Pardo (I.Pardo[at]kent.ac.uk) and Dr Manos Spyridakis (maspy[at]uop.gr). Selected papers and panels will be announced by the 13th March 2017.

Visit our Facebook page to browse the Workshop Photo Album.

This meeting was generously supported by a Workshop Grant from the Wenner-Gren Foundation for Anthropological Research.

Since the mid-1990s anthropological reflection on legitimacy and legitimation (of ordinary people’s morality and actions; of the law; of politics; of governance) has grown into a robust and sophisticated debate through international meetings and publications. This workshop was an intense invitation-only intellectual exercise aimed at developing new ideas through productively critical discussion among 14 early-, mid-career and senior scholars (anthropologists and qualitative sociologists), who are committed to contributing to an ethnographically-based theory of legitimacy and legitimation. Benefiting from a wide-ranging ethnographic and analytical field, the discussions addressed conflicting moralities across the social, cultural, economic and political spectra and the corresponding progressive erosion of the legitimacy of ‘the system’–especially of governance. Scholars have long pointed to the problematic raised by this key topic in theoretical anthropology. The Brexit affair, like electoral behaviour across Europe and the USA, graphically exemplifies the acute crisis of rulers’ responsibility and accountability that mars many democracies. World-wide discontent with how the dominant elite manage power is generating grassroots opposition. The questionable legitimacy of local and supra-local bureaucracy, governance and the law is compounding this problem, contributing to the growing gap between the rulers and the ruled, which is particularly evident in the urban field. Ethnographic knowledge gained through long-term field research has an important role to play in understanding and addressing this gap. A major aim of this workshop was to stimulate critical scholarship and the exchange of ideas among a strong field of professional researchers engaged in demonstrating the epistemological significance of charting new theoretical directions on ‘legitimacy’ and ‘legitimation’ as loci of ethnographic research that matters to urban futures. Publications based on the work done during this meeting will contribute to an ethnographically-based theorization of “legitimacy  and urban governance”.read more